Recently I was sent a personal invitation by APP (Asian Pulp and Paper) to visit their mill in Perawang, Sumatra, Indonesia. As an author, my main job as part of the ‘Cottonsoft Books for Change’ was to take books donated by the company to learning centres near the mill – where they’re in short supply. We plan to work with selected New Zealand schools this year to get more by donation. 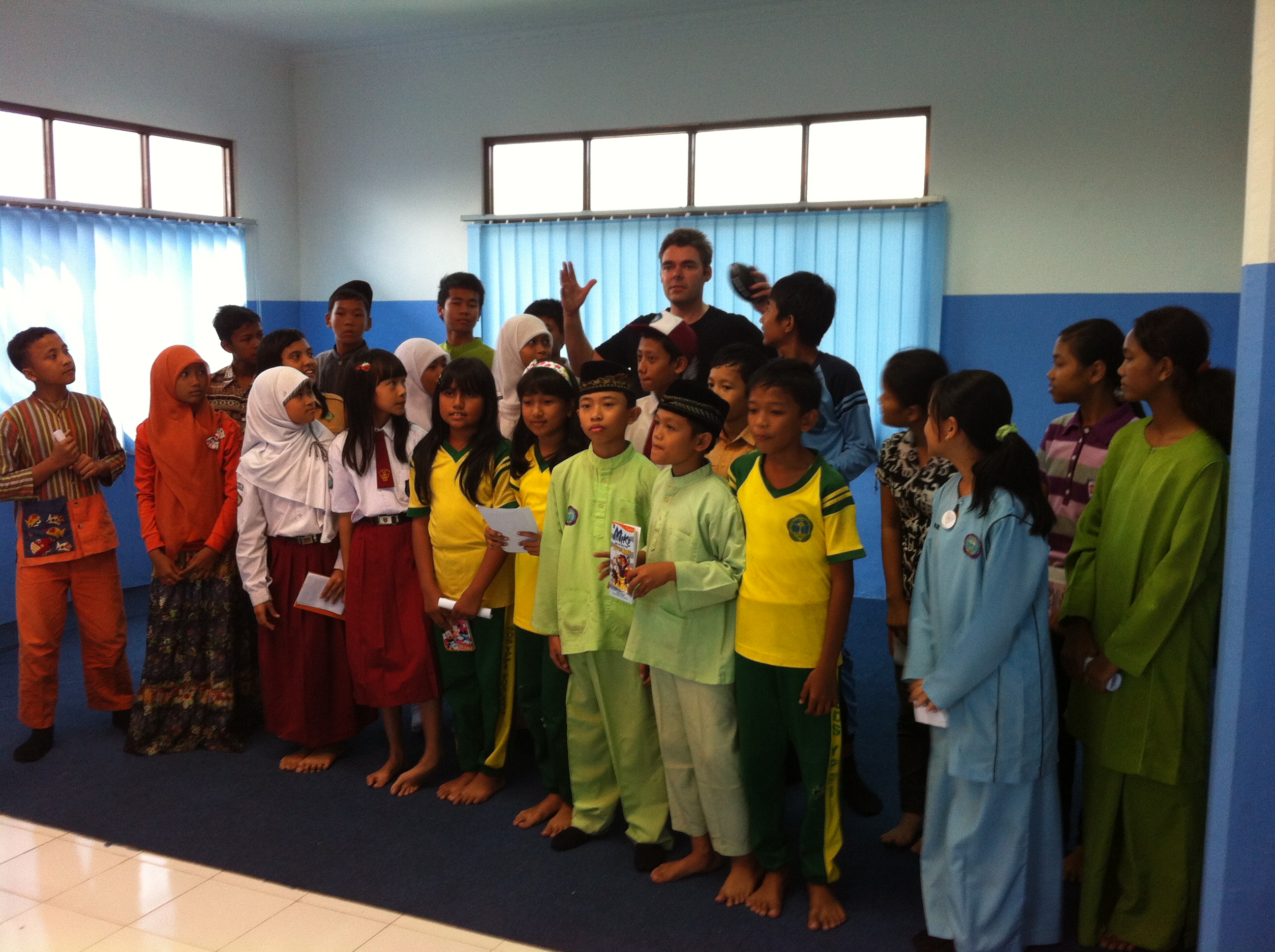 More on Perawang soon, but first, Jakarta, a city of eleven million. Sunda Kelapa, a fishing port where nothing much has changed for hundreds of years. The Makassar schooners are impressive, as are the smiles of local workers. State of the water? Not so much. 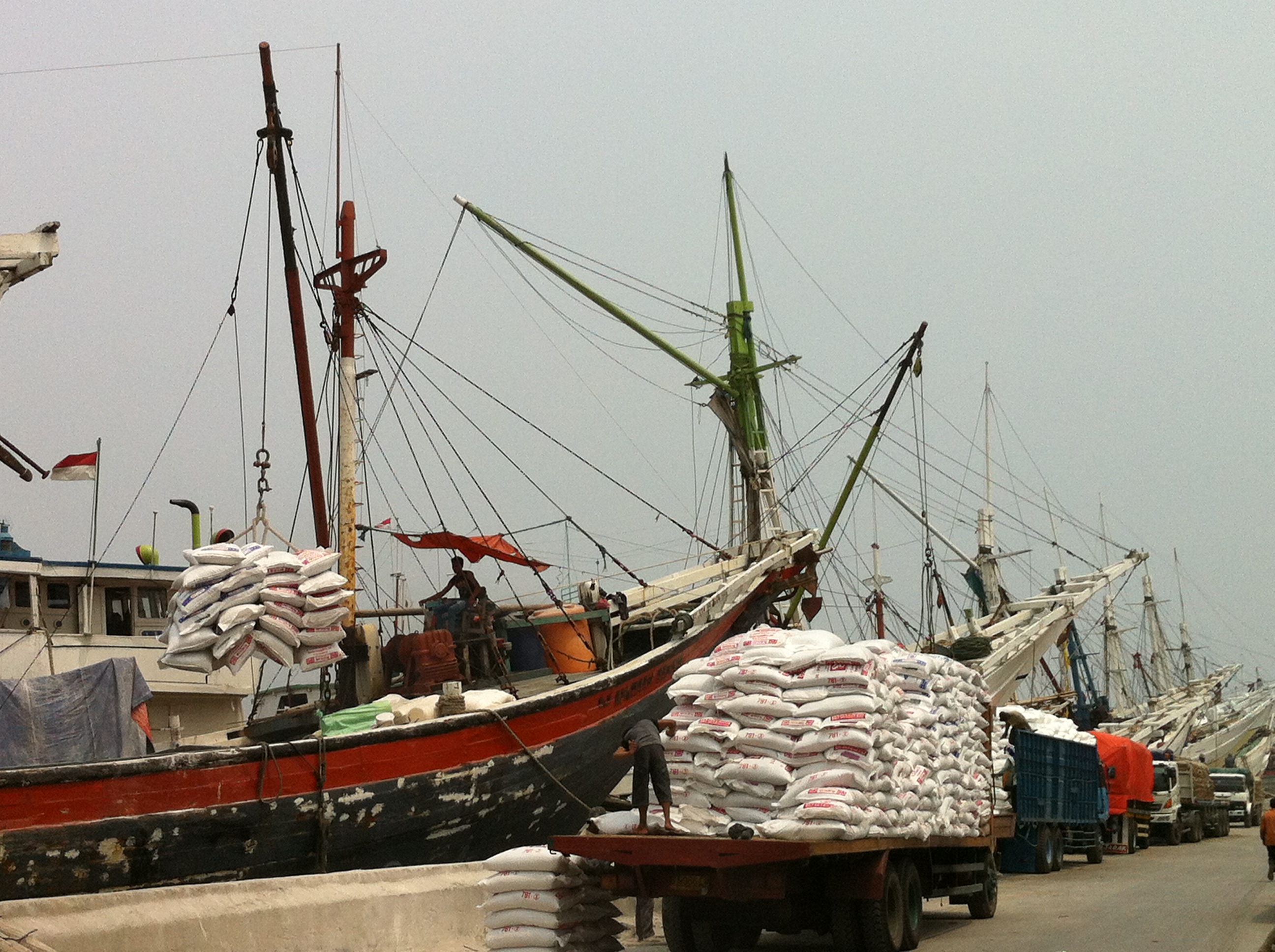 Something I love to do when travelling is hire a taxi for a day and go for it. My driver in Jakarta was Agus, an amiable bloke who works 12 hours a day, six days a week and gets to see his young family – who live 250km away – once every six weeks. I took him to the zoo, bought him lunch and we swapped stories. 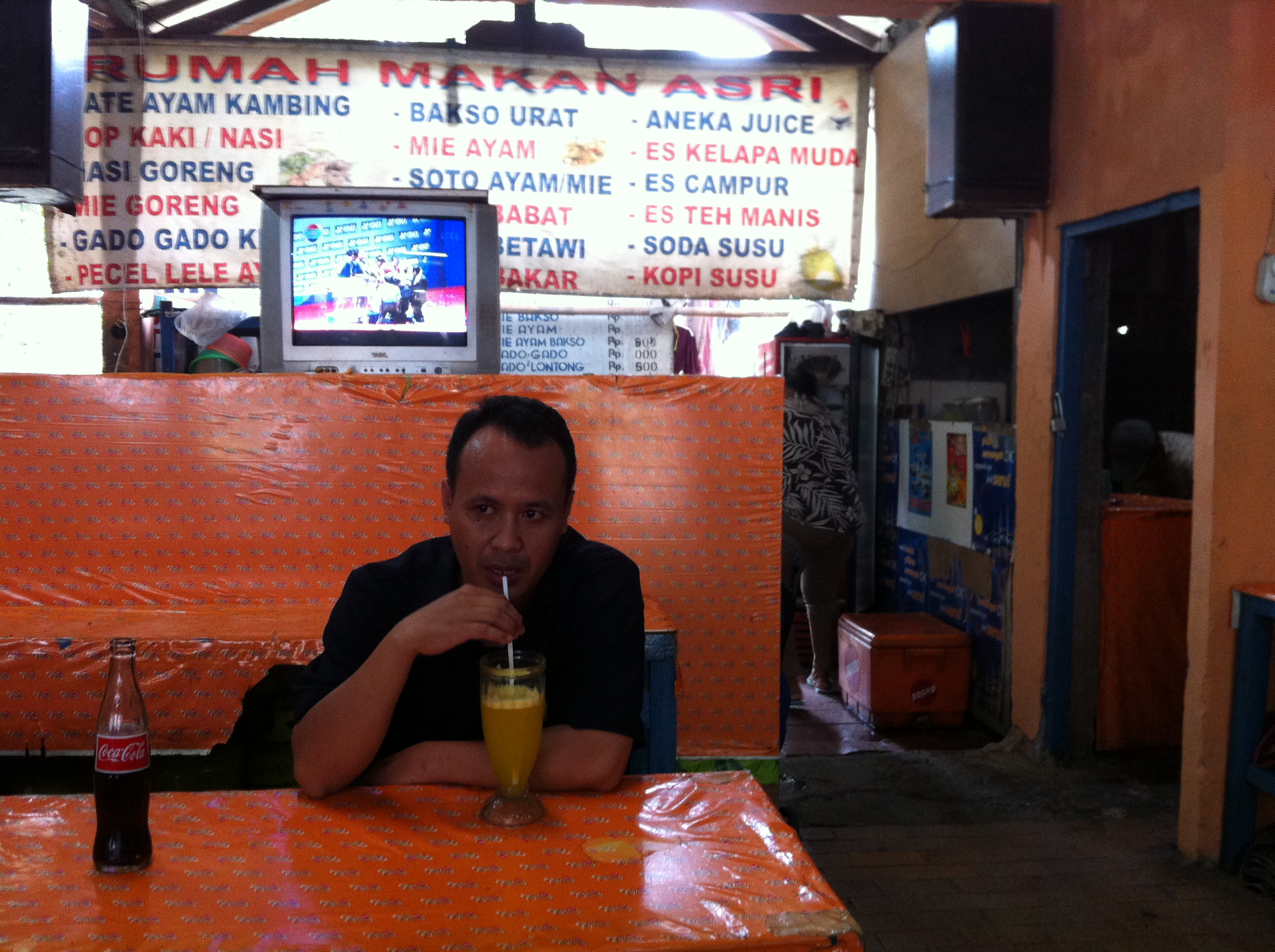 Jakarta Zoo was, let’s say, surprising. I wanted to see one of Indonesia’s badass national animals, the Komodo dragon. We also found orangutans who thought nothing of bottles, ice blocks and yoghurt containers being hurled their way. I was speechless. Agus checked his phone. 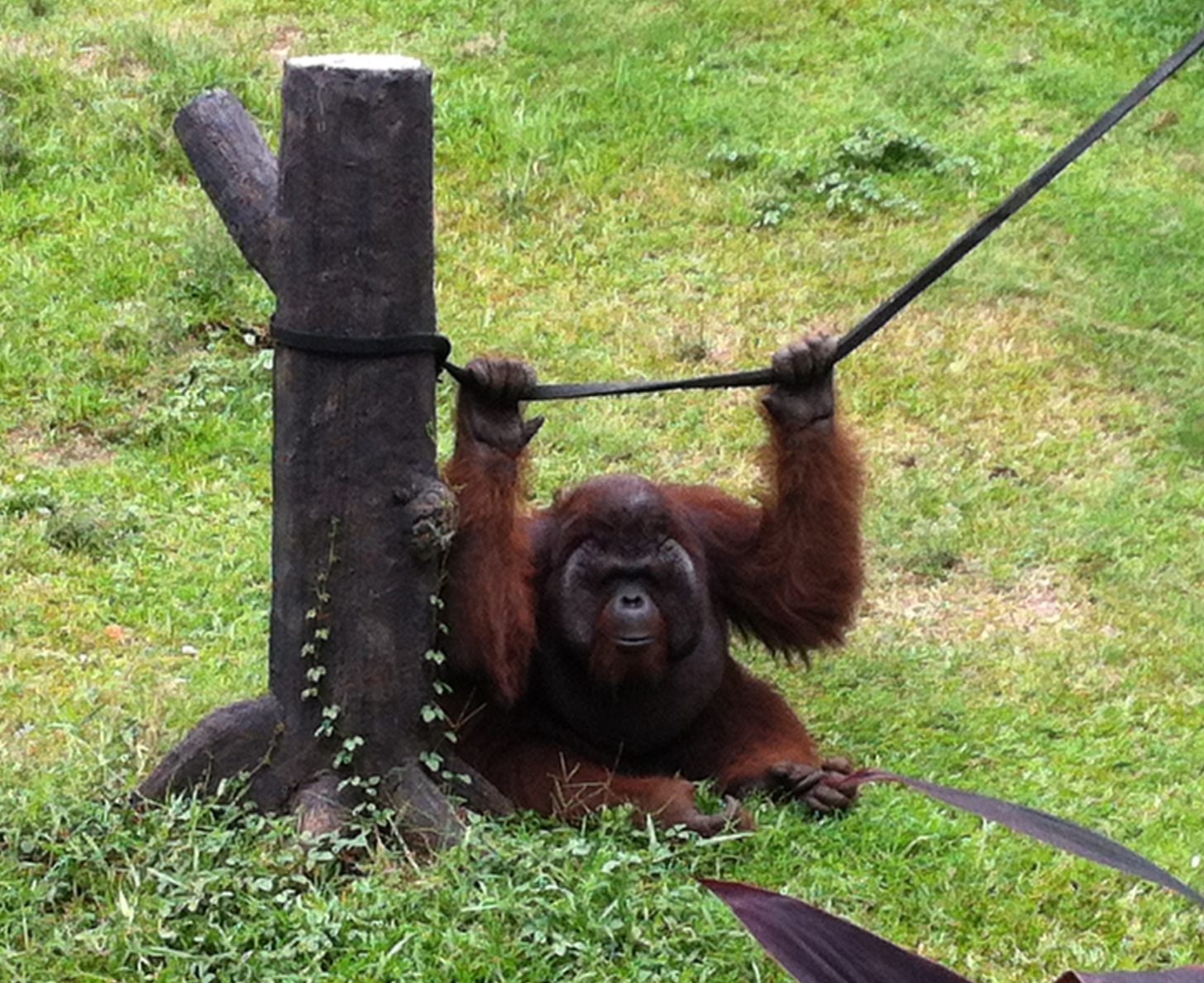 Indonesians are right into badminton, but also like a bit of soccer. No zoom or cage here. Back in the city I heard calls of, ‘Hey Mister’ outside the Jakarta History Museum, also known as Fatahillah Museum. I thought maybe these boys were good candidates for ‘Books For Change.’ I asked to take their photo, which they seemed happy enough with. (Note: As a tourist, you do feel an idiot giving money but it’s better than the alternative.) 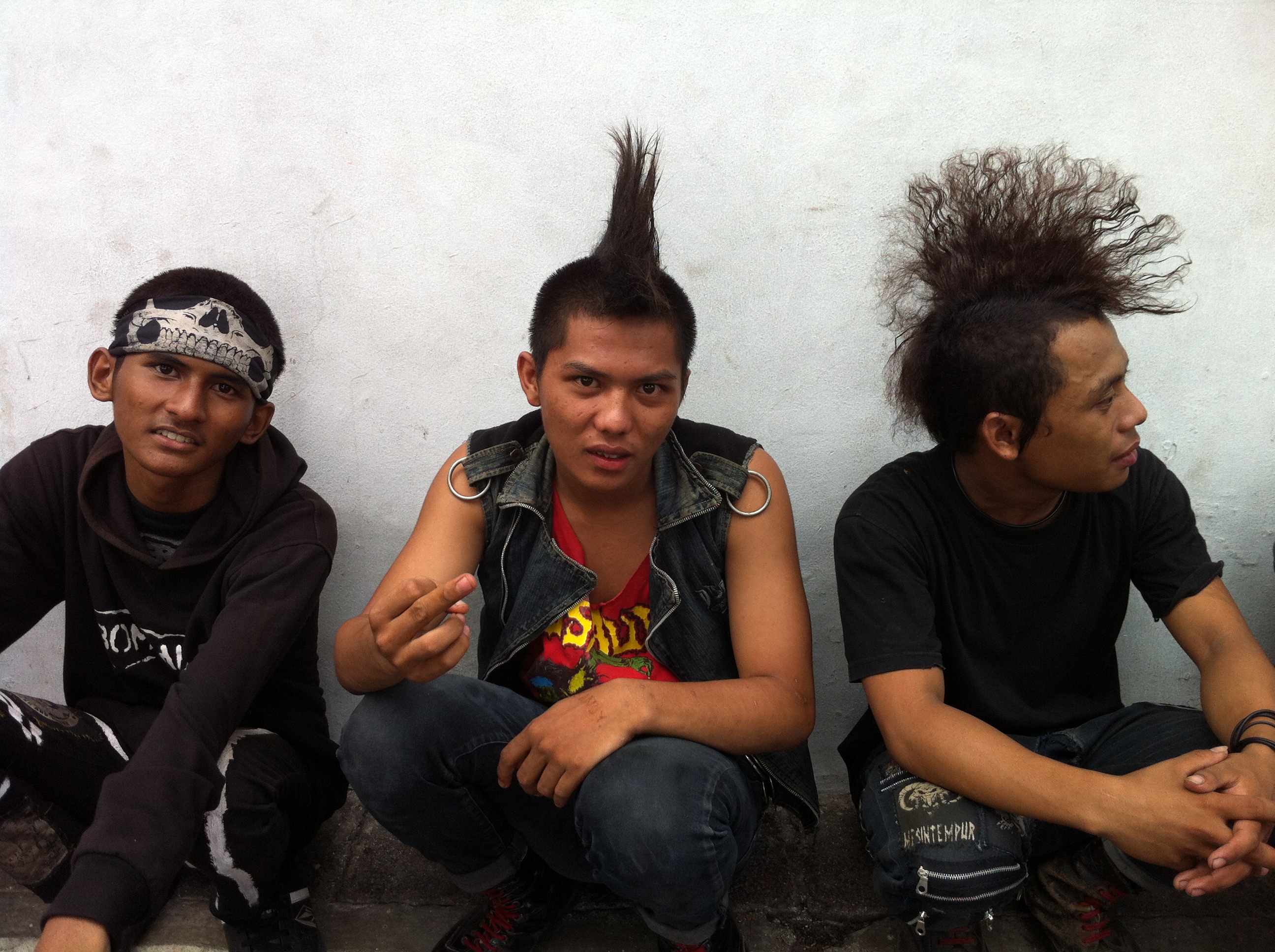 Outside the museum a ritual took place. I had no idea what was happening. A small child was wrapped in cloth in the midday heat and made to stand in the main square, while fire eaters chanted and prayed. Agus tried to explain: ‘Please don’t think this is common. It is something to do with their past sins,’ to which I replied, ‘I think we should move on.’ 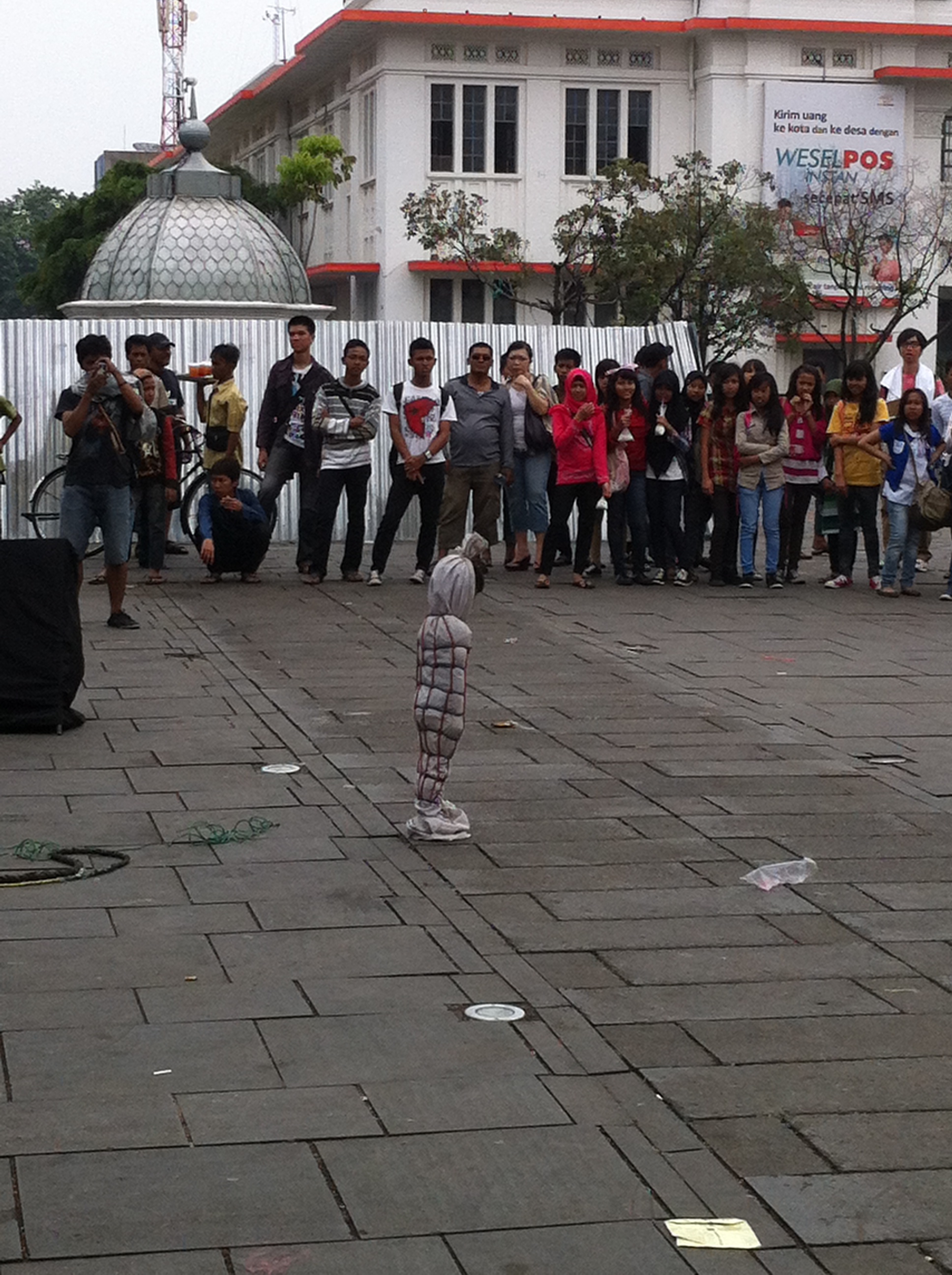 From Jakarta we flew with Darragh and Negla from APP to Pekanbaru, Northern Sumatra. A two hour drive from there and you’ll find yourself at Indah Kiat pulp mill, which employs 11,000 people. Pictured below are the conservation areas, shown to us by a charming guy named Ali who introduced me to Snakeskin fruit, possibly the tastiest on the planet. 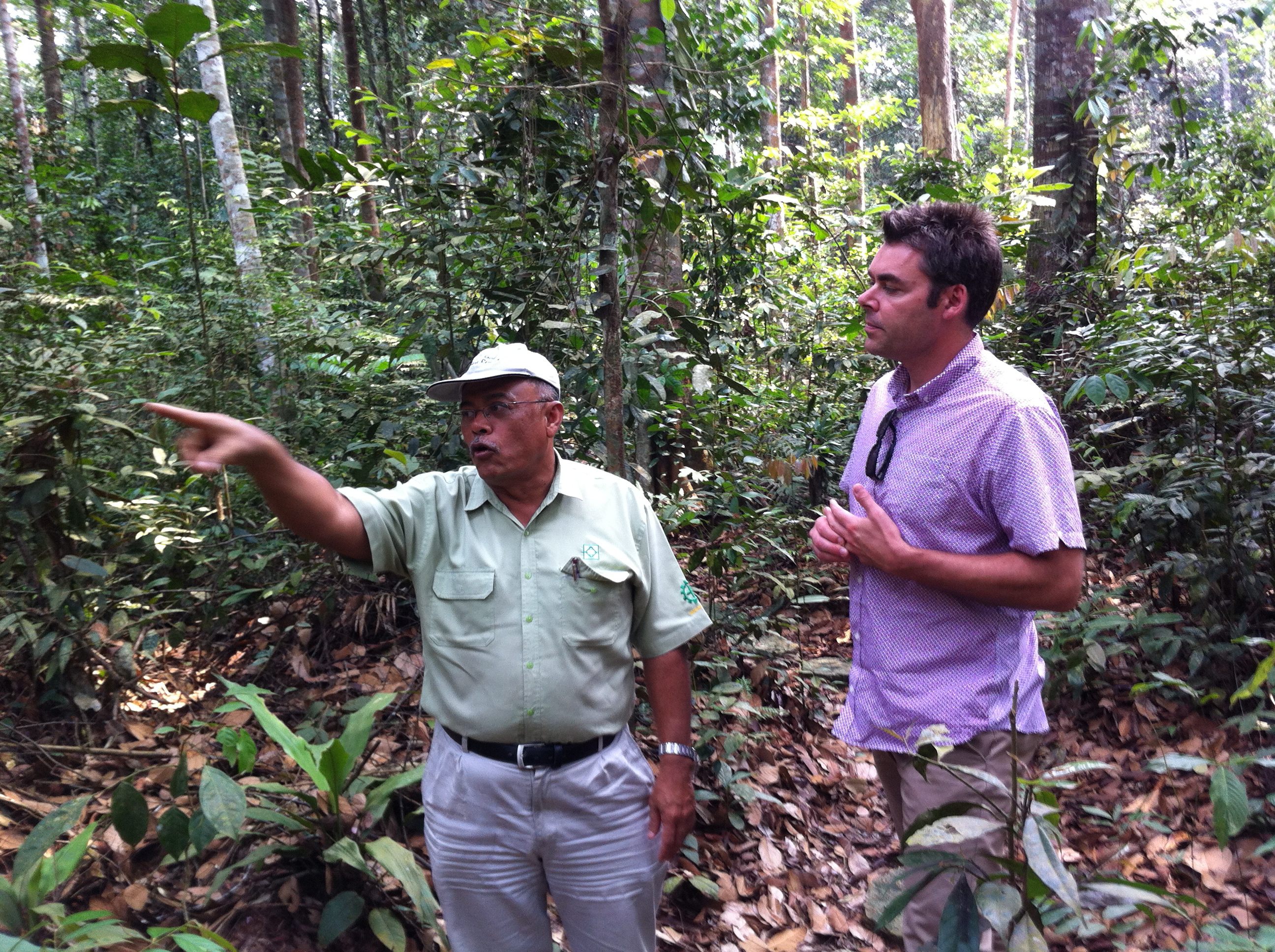 We were shown through the Eucalyptus harvests which are replanted every five years. These ladies found it hilarious how inadequate my skills were. Funny, I thought I was actually doing all right. They all had smart phones and demanded a photo. Many of the trees the ladies were planting had been cloned in the research side of the mill. Due to Indonesia’s perfect climate – very hot with bursts of rain – these trees grow incredibly quickly. And below – the result. 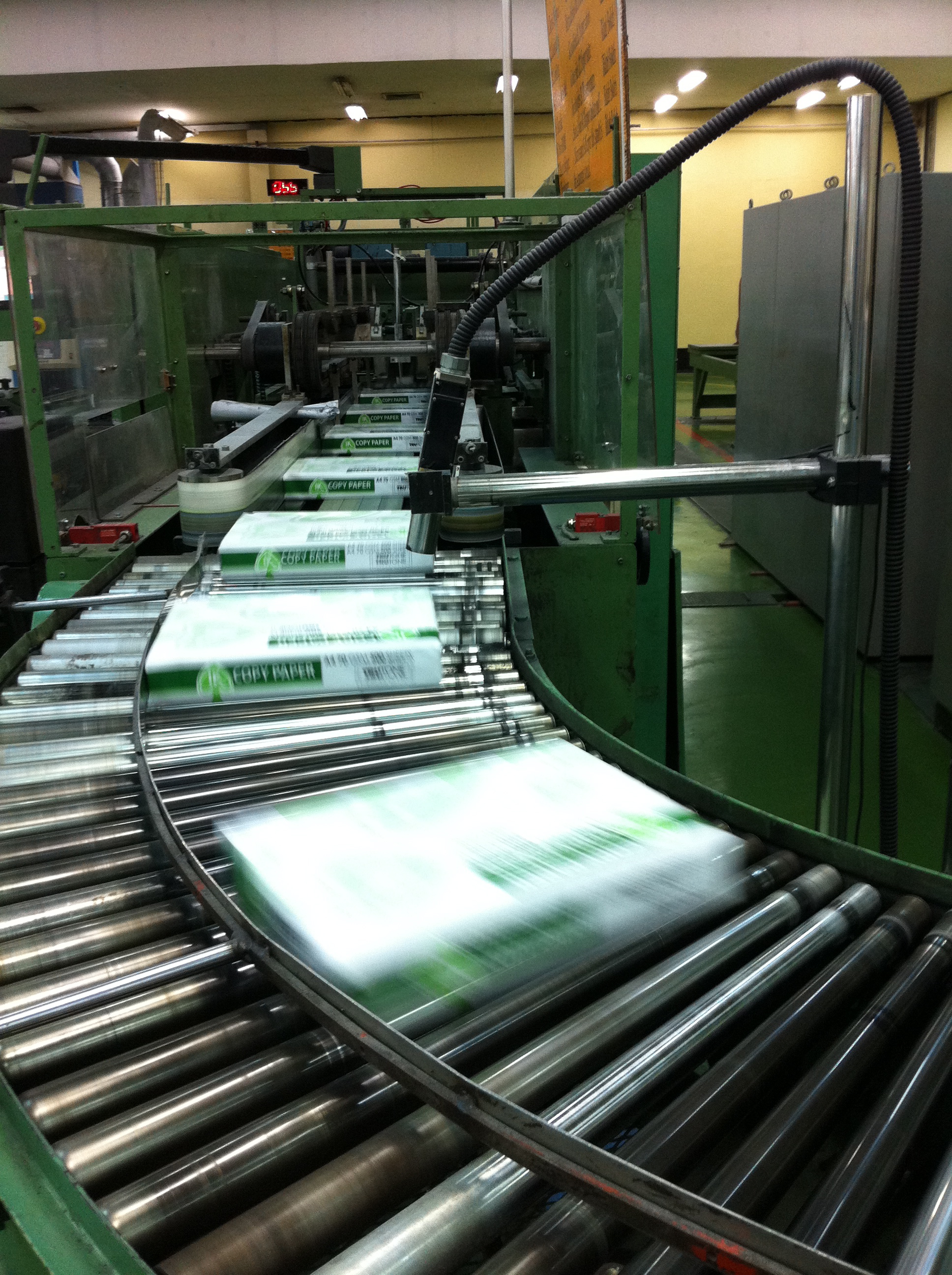 The Learning Centre in Pirawang helps the community around the mill. It’s used by 1500 people, has access to the Internet and a library. Sadly, the latter needs more titles – which was the reason for my visit. I had boxes of donated books and gave a talk about how I became an author. The language barrier meant the ukulele and rugby ball came in handy, as did a horrendous attempt at ‘Gangnam Style.’ The kids were brilliant, asked great questions (mostly through a translator) and didn’t stop smiling. Felt very honoured to be there. Video to come. And then. Goodbye to entire families on motorbikes, chicken curry donuts, dragonfruit, massive insects, mosques waking you at 4.30 am, rice cakes, yellow watermelon, lontong soup, beef rendang, AK47 table lamps, half finished coffee houses and a fruit which, and I quote, tastes like heaven but smells like shit. Terima kasih, Indonesia! 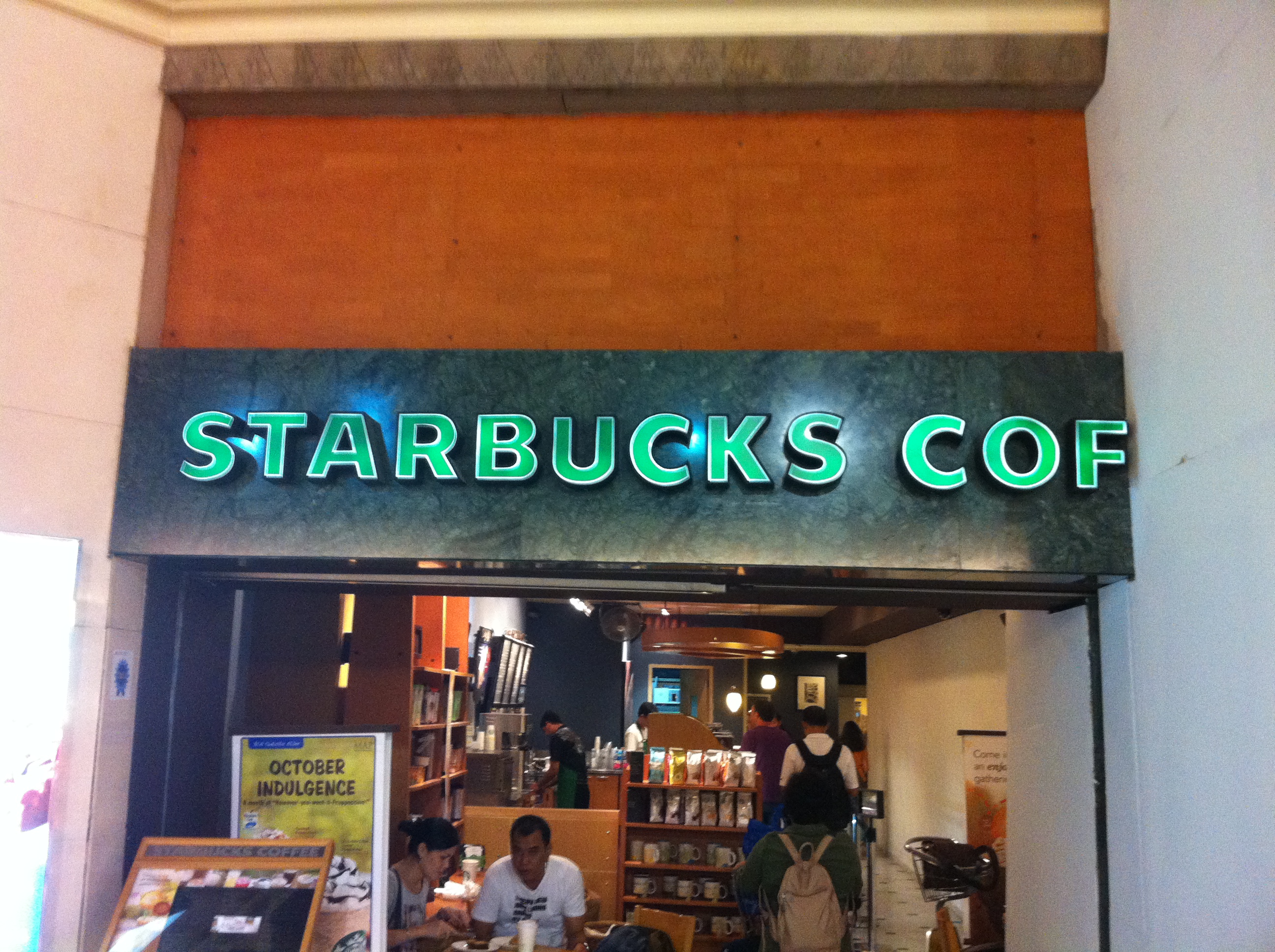 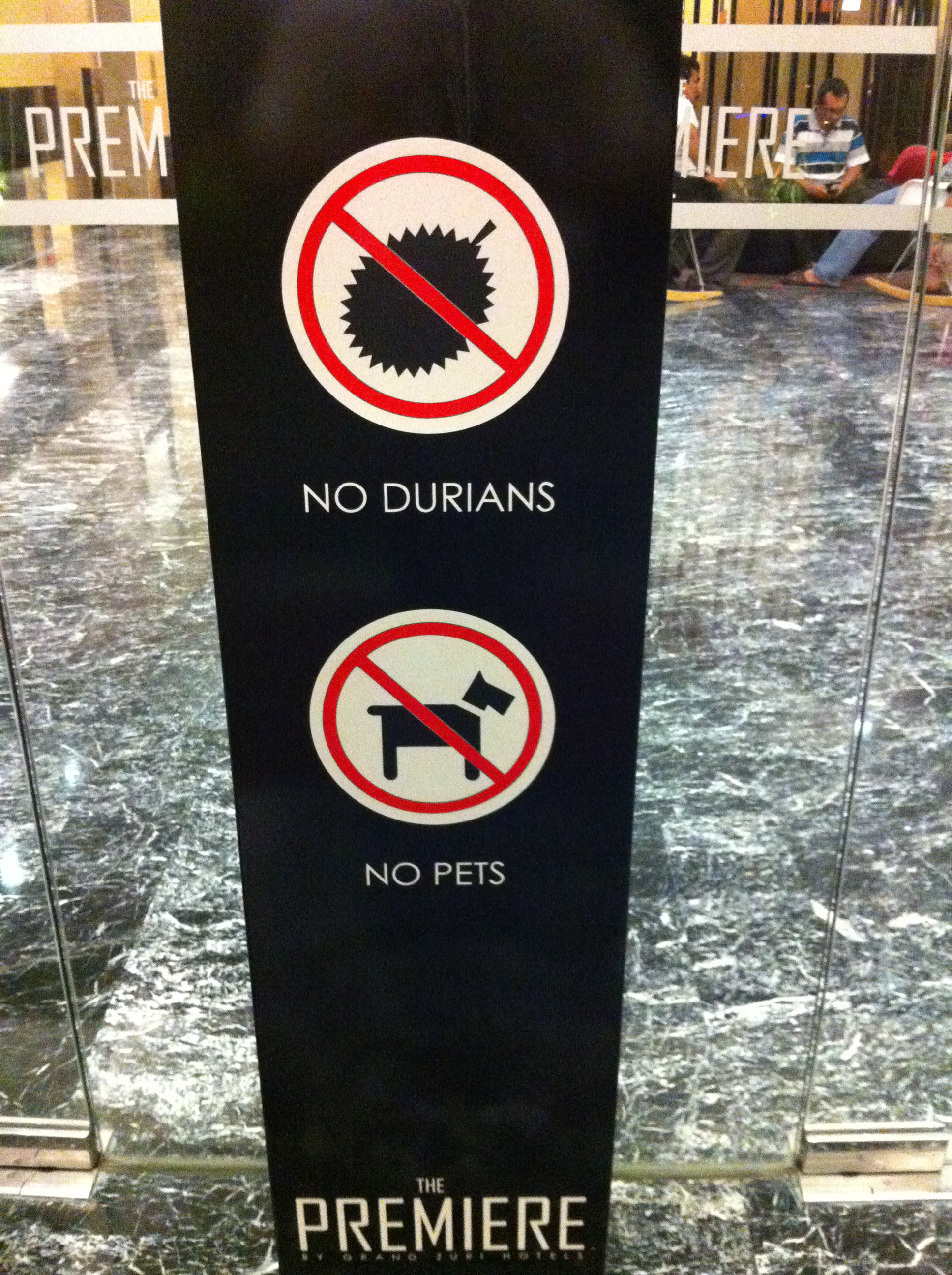 Do not place a photograph of your ­favourite author on your desk, especially if the author is one of the famous ones who committed suicide.

Do be kind to yourself. Fill pages as quickly as possible; double space, or write on every second line. Regard every new page as a small triumph

Do give the work a name as quickly as possible. Own it, and see it. Dickens knew Bleak House was going to be called Bleak House before he started writing it. The rest must have been easy.

Do change your mind. Good ideas are often murdered by better ones. I was working on a novel about a band called the Partitions. Then I decided to call them the Commitments.

Do not search amazon.co.uk for the book you haven’t written yet. Okay, everyone apart from J.K Rowling’s – but you get the idea. In every career there will ups/downs, broke publishers and deals gone bad. Accept it and write the next sentence. Have fun, that’s the reason you do this, remember? Charles Dickens never had the distraction of Twitter or youtube. How can anyone get any serious writing done when there’s FB to check, online bills to pay, news sites to scour, and Nigerian spam to see to. Not to mention Amazon, CNN, and craigslist to buy the book ‘How to write a bestseller while surfing nothing but rubbish.’ My suggestion, if you’re anything like me, is to grab the Freedom app, which locks you out from online until next time you reboot your computer. No, we shouldn’t need it. Yes, some of us do.

Some great advice I was given about characters – keep the story simple, make the characters complex. Motivate your characters to make hard choices. Impossible choices. Compelling choices make classic moments. Stephen King goes by the mantra ‘Kill your darlings’ but that’s another kettle of fish. He seems to like killing people (in his books that is.) Very proud to say my first novel for kids is out with Allen and Unwin come Feb, 2013. I’ve been working on it for a while so to receive a pre-copy in the mail was a great feeling. The story is about Toby Gilligan-Flannigan, a boy who hates his name but loves his sport. The latter of which played a major role in my childhood. So did rewards for doing well. I only have to look at my daughter’s face when she wins player of the day with accompanying trophy. From the sideline I’ve also witnessed bribery. ‘Max, pie for a try!’ ‘Olivia, movie ticket for a wicket!’ With Toby in ‘Shot, Boom, Score!’, I wanted to take this theme to a new level. When Toby’s old man offers his son the ultimate prize in return for playing well, class bully Malcolm McGarvy does his utmost to ruin the party. This is the latest picture book I’m working on with illustrator Guy Harkness. Like many things, the project started out as a joke. My daughter and I were bored one afternoon and tried to think of the craziest thing we could think of. A dog called Mr Nut who ate bathrooms came to mind. My daughter took the book to school and the response was great. Damn! Now we actually had to do something about it! We’re working on it. Story is complete – pics are almost there.