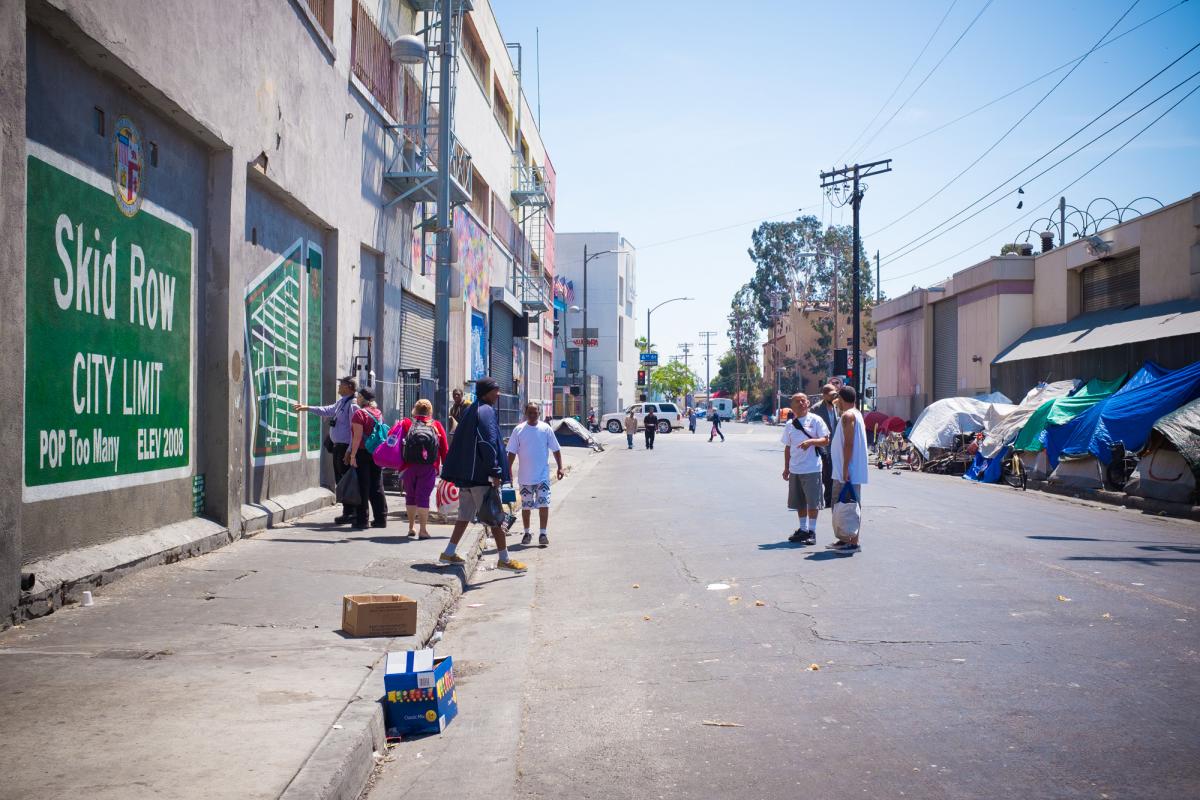 Tonight I head to Los Angeles!

Over the next twelve days, Professor Peter O’Connor from The Creative Thinking Project will work closely with downtown LA organisations working to aid and abet homelessness—among them Urban Voices, My Friend’s Place, and Skid Row Housing Trust. Our workshop will pose questions about the visible and invisible strands of those who live on the streets of Los Angeles. Feel free to read more below, the words of which are taken from the original Newsroom article.

How do you measure misery? Justin Brown travels to ‘the worst man-made disaster in the US’ where he finds hope in theatre.

It’s one in the afternoon and I’m sitting on a park bench outside Verona Cafe on K Road, Auckland. Two men sit beside me. One is drinking warm beer from a 750ml bottle as he chats to a man in a wheelchair with a cigarette butt hanging from his mouth. The men pass the butt to each other, inhaling what is left of it. The man in the wheelchair has an issue with his right leg, it is bloated and twice the size of his left. His mate unscrews the cap of his pawpaw cream tube and rubs some on his friend’s leg, laughing. ‘Now don’t go getting any ideas!’

I soon learn that one of these men has been homeless for 26 years. I feel ridiculous and ashamed about the MacBook in my backpack, the iPhone in my pocket, and the cash in my wallet. The men pass around 50c coins as if they are gold. I give them $20 to buy a burger, knowing where the money will go. Even so.

As I walk to my car I half expect to catch Six, the editor of the K Rd Chronicles who recently hosted a web series of the same name. I loved that series. It gave me an appreciation of what happens on a road where both awful and beautiful things happen, a road which few of us want to think about, mostly because the topic of homelessness involves sticky, murky, uncomfortable questions. Why is it one of our country’s most pressing problems? How did we allow this to happen? Why don’t we care?

A few months later I meet the star of the show herself. Six, whose blurb on K Rd Chronicles describes her as an ‘overqualified, underemployed, transgender journalist’. Six sits cross-legged outside St Kevin’s Arcade, she is selling her community newspaper. I stop. Should I approach her, tell her how much I enjoyed the series? But what will I say? Don’t be such a wimp. As I should have expected, Six is engaging, smart and polite. I take a copy of the paper and go for coffee, unaware just how important her series will be to me.

HSTC is New Zealand’s only theatre company made up of people who are, or have been, homeless. It’s also where Peter created That’s What Friends Are For, a play that ran for five nights at Auckland’s Basement Theatre. The show was advertised as an experiment to discover whether the cast could make friends with the audience in just one hour. In September 2019, the show would be presented with the supreme Creative New Zealand Community Arts Award and the homeless cast were flown to Parliament to receive their award.

Six months later and Peter receives an invitation to Los Angeles to create a performance with arts organisations working with the city’s homeless. Skid Row, in particular. He is asked to collaborate with LAPD (Los Angeles Poverty Department), The Skid Row Housing Trust, Urban Voices, Piece by Piece Mosaic arts and My Friends Place in a bid to create a performance in one week at the Museum of Contemporary Art.

‘Just kidding. I want to make a show about the possibilities inherent in hope. To create a play about seeing Skid Row not as a problem but rather about seeing the possibilities of the homeless of LA. To witness strength, purpose, and beauty amidst the ugliness. Let’s celebrate the beauty of survival against all odds and mourn those who have succumbed.’

‘Who are the actors?’

‘Wait, are you nervous?’

All of this despite Peter having created and researched theatre in earthquake zones, prisons, schools, psychiatric hospitals, after terror attacks and with the homeless for nearly 40 years.

Andy Bales, CEO of the Los Angeles Union Rescue Mission has called Skid Row ‘the worst man-made disaster in the US, a place where 53 blocks of abandoned people have been left to die.’ Those 53 blocks account for approximately 13 percent of the 36,135 homeless individuals in Los Angeles. Since 2012, the number of homeless in Los Angeles has increased by 50 percent. Skid Row itself is home to approximately 5000 people. Imagine the entire population of Warkworth or Cromwell each living in little more than a one-man tent.

After a recent visit to the area, Peter warns me I’ll be in for a shock. ‘The level of human misery on the streets is like visiting a war zone,’ he says. ‘The overwhelming smell of urine and human waste, abject poverty, and loss of hope in the faces of so many is deeply impacting.’

Why such a toilet shortage? Corruption. A decade ago 27 Porta-Potties were placed on Skid Row and from day one gangsters charged the homeless anything from one to five dollars to use them. These days there are fewer than a dozen toilets, forcing many dwellers to use buckets, which are emptied into the street or trash cans. Once a day, the streets are power-washed by authorities to stop disease.

Peter: ‘Yet in the midst of such despair, I found arts organisations doing extraordinary work, rebuilding community and creating moments of beauty that act as an antidote to the ugliness of people’s lives. These social service agencies are committed to reminding the city that Skid Row isn’t the problem, it’s a symptom of a wider problem of human greed that also impacts us in New Zealand. Our show is about the possibilities of Skid Row, of asking people to look with fresh eyes at the beauty and capacity and glory of those who live on these streets.’

In the past, my travel books have been light and fun, though they’ve always been about people. In UK on a G-String, I door-to-door busked my way around the Motherland. In Teed Off in the USA, I attempted to play golf with whoever featured on the front page of the newspaper in whatever town I was visiting, and in Bowling Through India the Black Craps and I challenged street kids to games of cricket. LA is very different. Peter isn’t the only one kakking himself.

As an ambassador for The Creative Thinking Project, I’ll be leading the documentary team. I’ll try to capture the moment, to find the story. I’ve met the Los Angeles crew on a conference call only, though as soon as I hung up I realised what a scarily brilliant beautiful honour it was to be invited to help curate a performance at one of the city’s major cultural institutions.

Ah, Doubt, I didn’t see you there! What if the whole project tanks? Is it possible to create a performance in one week that highlights the enduring spirit of hope and resilience in the depths of extreme poverty and despair in one of the richest cities on the planet?

What about our American mates? What do they want to achieve? Amanda Hunt, Director of Education and Senior Curator of Programs at MOCA is interested in revealing the artistic and creative potential of the city’s homeless. ‘In doing so,’ she says, ‘we believe it unveils and reminds the city of the humanity of those who live on our streets.’

How do you measure misery? More to the point, how do you fix it? An actor named Richard took part in That’s What Friends Are For at The Basement Theatre. When he was asked what he enjoyed most about the experience he replied, ‘You want to turn your negatives into a positive, and theatre is a great way to do it. Hopefully, I’ll keep doing it for the rest of my life and I know a lot of the cast feel the same. We shine when we’re on stage.’