written by Justin on March 2, 2015 in Random Style with no comments
← older posts newer posts → 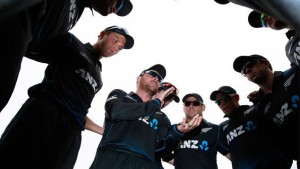 It is a typical morning in the Black Caps office. Stuffed wallabies and kangaroos hang from the walls. Brendon McCullum (Macca) is reading notes on his treadmill, coffee in one hand and 45kg dumbell in the other. Martin Guptill sits at his desk studying notes.

The office door swings open and a cheesy grin appears.

Macca attempts to thwack Warner across the head with his office chair.

Macca picks up Warner with one finger and hurls him out of the window without spilling a drop.

Macca sits down, pats his pet Komodo dragon and unscrews the top of his power shake. He skulls the contents and crushes the bottle with his forehead.

The office goes quiet. Macca looks at the rest of the Black Caps who have arrived on masse.

GRANT ELLIOTT: Um, I’m, I’ve got to be somewhere.

Grant, Ross and Adam flee. Three cars start up and speed off.

Tim Southee appears from the kitchen with two semi-naked broads hanging off him. Macca holds up the presentation notes.

TIM: Come off it, Macca! I’ve done heaps lately. Plus, you know, got my hands full.

A tornado of canary yellow enters the office. It is Pat Cummins and he looks pissed.

PAT CUMMINS: Change of plan. I’m Mitch today and I do things different. Arm wrestle to see who wins this deal.

Macca rolls his sleeves up.

PAT CUMMINS: Not you, him.

Him is the mild-mannered, bearded man in the beige cardigan by the photocopier.

A bogan appears, clinging to the office window.

DAVEY WARNER: You got no chance, P*SSY!

Macca slams the window on Warner’s hand, then pulls it up just enough. Warner falls to the ground below and crushes Mitchell Johnson’s mobile tattoo parlour.

PAT CUMMINS: Get on with it, WIMP.

KANE: What about a biscuit?

Pat grabs Kane’s right arm and forces it inches from the desktop. Kane smiles and reciprocates. The desk is split into two. Pat writhes in pain.  A broken wrist and sweaty underarms.

KANE: Thank you for the opportunity. I think you did very well.

Kane digs into his work bag and pulls out a can of Rexona.

KANE: Maybe use this next time?